As I am sure will be the case with most people reading this, learning how to ride a bicycle is one of my first and indeed, one of my happiest memories. After much trouble and difficulty, remaining upright and moving forward without stabilizers, brought about feelings of success and, perhaps more than anything, excitement. An exception to this rule

By contrast, for the majority of those living through the 1890s who had up until this period never before cycled, mastering a bicycle was an event which occurred at a much later stage in life. However, in the absence of any acquired experiences that could prepare you for maintaining your balance whilst pedaling forward on two wheels, this did nothing to make the whole experience any easier. In her book, A Wheel within a wheel. How I learned to ride a bicycle, with some reflections by the way (available for online reading here: https://archive.org/details/wheelwithinwheel00williala), Frances Willard, aged fifty-three, described the process by which she learnt to ride a bicycle she named ‘Gladys’ as involving,

‘First, three young Englishman, all strong-armed and accomplished bicyclers, held the machine in place while I climbed into the saddle. Second, two well-disposed young women put all the power they had, until they grew red in the face, off-setting each other’s pressure and thus maintaining the equipoise to which I was unequal. Third, one walked beside me steadying the ark as best she could by holding the centre of the deadly cross-bar, to let go whose handlebars meant chaos and collapse. After this I was able to hold my own if I had the moral support of my kind trainers, and it passed into proverb among them, the short emphatic word of command I gave them at every few turns of the wheel: ‘Let go but stand by.’

H.G. Wells also captured the difficulties you would encounter when taking your bicycle out for it’s first public spin in his 1896 novel The Wheels of Chance (available online here: http://www.gutenberg.org/files/1264/1264-h/1264-h.htm). 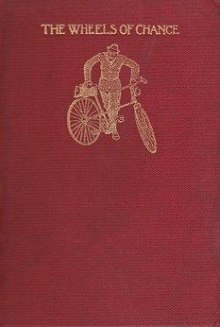 Cover to the Wheels of Chance. Source: https://en.wikipedia.org/wiki/The_Wheels_of_Chance

The subject of the book was a ten day cycling tour taken by ‘Mr Hoopdriver’, a man in his early twenties who was based on Wells’ own experiences of working as a drapers assistant. Wells described how on the first day of his cycling holiday that there was,

‘Only one phrase to describe his course at this stage, and that is- voluptuous curves. He did not ride fast, he did not ride straight, an exacting critic might say he did not ride well- but he rode generously, opulently, using the whole road and even nibbling at the footpath. The excitement never flagged. So far he had never been passed by anything, but as of yet the day was young and the road was clear. He doubted his steering so much that, for the present, he had resolved to dismount at the approach of anything else upon wheels.’

After seeing a carter making his way towards him, Hoopdriver was able to put this approach into practice and ‘according to his previous determination, resolved to dismount’. However, this did not altogether go as planned, as,

‘He tightened the brake, and the machine stopped dead. He was trying to think what he did with his right leg whilst getting off. He gripped the handles and released the brake, standing on the brake and waving his right foot in the air. Then- these things take so long in the telling- he found the machine was falling over to the right. Whilst he was deciding upon a plan of action, gravitation appears to have been busy. He was still irresolute when he found the machine on the ground, himself kneeling upon it, and a vague feeling in his mind that Providence had dealt harshly with his shin.’

It would appear that such an experience was commonplace for those who learned to cycle in the 1890s, with Willard also describing how,

‘One bright morning I bowed on down Priory drive waving my hand to my most adventurous aide-de-camp, and calling out as I left behind, ‘Now you will see how nicely I can do it- watch!’ when behold! that timid left foot turned traitor, and I came down solidly on my knee, and the knee on a pebble as relentless as prejudice and as opinionated as ignorance.’

Indeed, both the writings of Wells and Willard highlight that the process of learning to ride a bike as an adult in this period, was not an altogether different one to the one which we all experienced way back when. Following these initial difficulties and injuries, came slow feelings of mastery. As Wells somewhat imaginatively put it,

‘To ride the bicycle properly is very much like a love affair- chiefly it is a matter of faith. Believe you do it, and the thing is done: doubt, and, for the life of you, you cannot.’

Drawing by Wells showing an old classmate how to dismount from a bicycle. Source: http://www.roadswerenotbuiltforcars.com/bitsandbins/

And then, of course, came the excitement of confidently pedaling a machine which opened up previously unheralded opportunities and possibilities. Soon after the quote above Wells stated how upon reaching the top of a hill Hoopdriver,

‘Put his feet upon the footrests, and now riding moderately straight, went, with a palpitating brake, down that excellent descent. A new delight was in his eyes, quite over and above the pleasure of rushing through the keen, sweet, morning air. He reached out his thumb and twanged his bell out of sheer happiness.’

Or in the words of Willard,

‘In less than a day as the almanac reckons time- but practically in two days of actual practice- amid the delightful surroundings of the great outdoors, and inspired by the bird-songs, the colour and fragrance 0f an English posy-garden, in the company of devoted and pleasant comrades, I had made myself master of the most remarkable, ingenious and inspiring motor ever yet devised upon this planet.

Moral: Go thou and do likewise!’

To begin on a brief personal note- it is rather noticeable looking down the side panel that I haven’t posted on here for a while. This can be explained by the fact that over the past few months I have been at bit overwhelmed with work and Victorian cycling as I’ve been in the process of finishing my master’s dissertation, which I am pleased/massively relieved to say has finally been handed in, hurrah!

At this stage I am not too sure whether I’ll go down the route of trying to have it published in some form so won’t be putting it online, but if anyone would like to read it then please email me and I will be very happy to send it over (warning, it is rather long and has much more on late nineteenth-century middle-class masculinity than is the case here).

Although I’ve now finished my masters I will carry on with the blog and be updating it much more frequently than I have been recently- it’s something which I’ve thoroughly enjoyed doing since I started it last January and I’m excited to see where it might take me next. A huge thank you to everyone who has taken the time to read and follow it throughout this year.

Anyway, with Christmas just round the corner I thought it would be good to firstly post some musings which Cycling published in 1891 on the links between Christmas cheer and cycling, and secondly to wish everyone reading this happy festive feasting and jollification! Victorian postcard of winter cycling on a boneshaker. Source: Staffordshire Archives and Heritage

‘Christmas and Cycling! What affinity exists between the two? Not a great deal, one would imagine; and yet the season of Yule is one that the cycler cannot pass over without notice. For it is as an everyday human being that Christmas, with its time-honored associations, appeals to him. Judged purely from the cycling standpoint, it has no great claim upon his feelings. It is a time when the idea of active participation in the wheel’s delights may generally be dismissed from the mind, and when feasting and jollification hold supreme sway.

As a bright oasis of goodwill and generosity in the dreary desert of selfish strife, the season of Nowell comes as a refreshing solace to any man- be he cycler or no. The cynic may decry the observance of the festival of Christmas, but the great majority of the world’s civilised races are as ardent as ever they were in keeping the one day in the calendar which has wrought such wonderful effects upon humanity. The keynote of ‘Goodwill towards men’ still rings out as clearly as it did nineteen centuries ago, and no doubt it will to the end of the world’s history.

Broad in his view must the cycler necessarily be, and our pastime has been one of the most potent factors in increasing that feeling of mutual goodwill, which should be even more general than it is. Nowadays few men mix so much with their fellow mortals and see so much of the varied phases of life as we cyclers, and so in all our rides abroad do we learn some lesson either from fellow humankind or from Mother Nature. Thus it is that while the rest of the world is at this Christmastide indulging in actions and expressions of goodwill, the cycler joins in the mighty chorus with a heartiness that has no equal.’