Newspaper obsessions with cycling accidents in the 1890s (talked about in the previous blog), were not just recognised as being a bit ridiculous by the cycling press. In October 1897 Punch, in usual satirical vein, used newspaper descriptions of cycling accidents as inspiration for an article titled ‘Wheel Wictims’. The article detailed some cycling ‘accidents’ which they claimed to have strayed from the pages of the St James Gazette (a London evening newspaper from the period).

The lesson? Perhaps that no matter what the time period, worries about people participating in new social practices and activities will always make for good satire.

Description of a Cycling Accident from 1900. Source: http://www.bedfordshire.gov.uk/CommunityAndLiving/ArchivesAndRecordOffice/PathstoCrime/Takingatestdrive.aspx

‘The long and terrible list of bicycling accidents, which (at this time of year) we publish daily, still continues to grow. The latest batch is more alarming than usual, and proves conclusively that no one with the smallest respect for their safety should ever be induced to ride a bicycle. There are some persons who seem unable to relish any amusement that is not fraught with peril, but to such we would recommend bathing in the whirlpools of the Niagara as, on the whole, a less dangerous recreation.

From the highland village of Tittledrummie comes the news of one terrible disaster. As James Macranky, a youth of fifteen, was attempting to mount his machine for the first time in his father’s garden, the unfortunate lad lost his balance and was precipitated into the middle of a gooseberry-bush, with the result that his right hand was severely scratched. Although he is still alive at present, it is highly probable that he will develop symptoms of blood-poisoning in consequence of his misadventure, when tetanus will certainly supervene, and the fatal bicycle will once more have brought one more victim to a premature death.

What might have been a fatal accident was averted by the merest chance in Kensington on Monday last. According to an eye-witness of the thrilling scene, a young lady was riding by herself (a dangerous practice which we have repeatedly censured) along the Cromwell Road, when a hansom-cab suddenly appeared, advancing rapidly in the other direction. With marvellous nerve the young lady guided her machine to the left hand side of the road while the cab was still fifty yards from her, and was thus able to pass it in safety. But supposing she had lost her nerve in this alarming crisis, and had steered straight for the horse’s feet, she could only have escaped destruction by a miracle.

Cartoon of a lady engaging in the ‘dangerous practice’ of ‘velocipeding’. Source: http://fitisafeministissue.com/2013/03/

We are loath to inflict too many of these gruesome stories upon our readers, so will only add one more for the present, which may well serve as a warning to all those who tour in districts unknown to them. A party of ladies and gentlemen made an expedition on bicycles last week in the neighbourhood of Beachborough. Being unfamiliar with the locality, they dismounted at the point where two cross-roads meet, and hesitated as to which direction they should take. By a providential chance, they decided to keep to the left, and so reached their destination in safety. Afterwards they learned with horror that had they chosen the other road, ridden two miles along it, turned to the right, and then to the left again, they would have found themselves close to the edge of the cliff, from which there is a sheer drop of some six hundred feet to the beach beneath! And there are still some foolish persons who attempt to deny the perils of cycling!’ 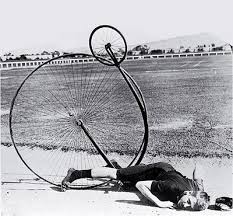 One of the historic ‘perils of cycling’. Source: http://www.mortaljourney.com/2011/03/all-trends/penny-farthing-bicycle-and-the-history-of-the-bicycle

Many previous blogs (‘A Tyranny of the Road‘, ‘Bicycles Against the Traffic‘ ) have explored the un-easy relationships which existed between cyclists and other road users in the early years of cycling. In 1896 Punch, in typical satirical vein, used these contrasting views of cyclists to outline the ‘new rules for cyclists’ that both the riding and non-riding public would like to see introduced. The question is, are the suggestions under ‘What All Cyclists Would Like’ all so ridiculous?

And, perhaps, would it be so difficult to produce a similar article today?

Every cycle-rider to pay a tax of fifty percent of the total income that he would have if every mile ridden brought him in a sovereign, and every tinkle of his bell a ten pound note.

Nobody to cycle without a license, issued by the Governor of Newgate, after a fortnight’s strict examination (on bread and water) in elementary mechanics, advanced hydrostatics and riding on the head down an inclined plane.

Any person found riding without such a license to receive a minimum penalty of ten years’ penal servitude, followed by police supervision for the rest of his natural life.

If caught on, with, or under a cycle within fifty miles of any town of five thousand inhabitants, the culprit to be fined a hundred guineas and bound over his own recognisances to abandon cycling and take up golf instead

When a cyclist on any road sees, or has reason to believe that he might see if he chose to look, any horse, cart, carriage, gig or other vehicle, or any pedestrian approaching, he (or she) to instantly dismount, run the machine into the nearest ditch, and kneel in a humble and supplicating attitude till said horse, cart &C., has got at least a mile away.

Every cyclist to be presumed, in all legal proceedings, to be a reckless idiot and on the wrong side of the road, unless he can bring conclusive evidence to the contrary.

All tourists on wheels to report themselves at every police station they pass. If un-vaccinated, they may be taken to the nearest doctor and compulsory inoculated with any old lymph or ‘anti-cyclin serum’ he may have handy.

Cyclists to be given a special track on all roads, quite half the width of the thoroughfare, and well asphalted.

In case of any accident, coachmen and car-drivers to be bound over to keep the pieces, and supply a brand-new machine.

All vehicles of every description to at once skedaddle up side streets when a lady cyclist is descried in the offing on a main road.

No bells, horns, or lamps in future to be required. Pedestrians to keep to the sidewalks or take the consequences. Cyclists to have the right to use the sidewalks as much as they like, and at any pace.

The City streets to be cleared of traffic and left as practising grounds for new wheelmen and wheelwomen.

Rate-supported stations (with free meals) for blowing up burst tyres to be provided on all roads.

Cycles (and cyclists) to travel free by rail.

And, finally, any person reasonably suspected of not owning a cycle or being about to get one to pay a fine of five thousand pounds to the Exchequer, be handed over to the Lunacy Commissioners, and detained at Her Majesty’s pleasure.

Punch’s warning to all cyclists who hunched over their handlebars. Source: http://www.bicycle-and-bikes.com/bicycle-news.html