After last week’s look at those issues cyclists campaigned for in the 1890s, the next couple of blogs will explore another area with other obvious modern parallels- cyclists relationships with other road users. As previous blogs have suggested (‘A Tyranny of the Road Part One and Part Two), they did not always get along happily (this was also mirrored in their relationship with the police, more on that here).

There were two main groups who cyclists shared the roads with in this period: horse drawn vehicles and pedestrians. Cyclists were by no means impeccable in their conduct with either of these groups. Those cyclists who ‘scorched’ and cycled in a fast and competitive manner were often criticised in the cycling and the wider press for startling horses and pedestrians. One member of the Hull St. Andrews C.C. commented that,

‘The effect of these scorching propensities is to frighten horses, startle people out of their wits, and cause numerous accidents of more or less consequence. If people wish to cycle for pleasure they adopt a moderate pace and cause injury and annoyance to nobody.’ 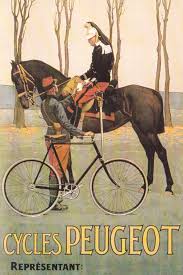 Cyclist and a horse getting along more happily. Source: https://seasonbooks.wordpress.com/2011/09/18/cycling-in-posters/

Some cycling clubs looked to ‘uphold the reputation of the pastime’ by making sure their members cycled in an orderly, courteous manner. On ‘club runs’ certain clubs would be led by a captain and sub-captain, who controlled their member’s behaviour with a military-like discipline. Reading the Canterbury Cycling Club’s handbook for members from 1893-94, you might be forgiven for thinking they regularly ventured into dangerous, unknown and hostile lands, not the Kent countryside. A few of the rules stated that:

As well as this, the captain possessed a whistle which he would use to communicate orders to members. The handbook revealed the different instructions indicated by different blasts of the whistle,

Members of a Cycling Club from a slightly later period. Source: http://www.oldbike.eu/museum/1900s/cycle-racing/16469-2/

Perhaps unsurprisingly, some clubs were less strict in controlling the behaviours of their members. One letter into Cycling in 1894 vividly described the transformation of his friend ‘Juggins’ after he went on a Saturday run with his club. The writer explained how ‘Juggins’ is,

‘Something of the city, a very nice, affable fellow of good attainments, well-read, a thoroughly good companion for a walking tour or a cruise, in brief, to all intents and purposes, a gentleman. But when Juggins, shortly after mid-day on Saturday, dons his cycling clothes, he undergoes the transformation so well illustrated in the case of ‘Dr Jekyll and Mr Hyde.’ By the time he has ridden five miles, and warmed to the exercise, his thin veneer of civilisation drops off. He harks back to some low ancestor- in a word he becomes little better than a savage.’

‘You, Mr Editor, can meet Juggins on every main road leading out of London every week-end. He, and his club companions, ‘spread-eagle’ the road, and not only insult the pedestrian, but do not spare their fellow cyclist who happens to be in their way, although Juggins always rides on the wrong side. This is not an overdrawn picture.’

Cyclists clearly then were by no means impeccable in their behaviour towards other road users. This was recognised by an article in the Leeds Express, which commented that,

‘Cyclists, as a body, are by no means impeccable, either on the score of manners, consideration for others, or capacity to manage their metal steeds’.

However, the article also argued that, ‘cads are not only on castors’, and explained how,

‘In a narrow part of a road or lane, or at some awkward spot, some drivers, even of large and bulky vehicles, will hold very steadily to the centre of the road, or even incline slightly to the wrong side, with evident glee in the possible embarrassment of the oncoming cyclist, whose margin of safety is thus ill-naturedly reduced. There is almost a tacit plot amongst drivers of a certain disposition and type to ‘bore’ the wheelman to the very side of the road.’

It was whilst in cities that cyclists had most reason to complain about other road users. One letter into Cycling in 1899 asked the editor to,

‘Allow me to call your attention to what I consider the greatest danger to cyclists (especially from the City Westwards), that is the hansom cab. He cares not where he drives, or whom he runs down, so long as he gets along. Plenty of insolence with it also. Omnibuses and four-wheelers and all other vehicles are law abiding and respectful; but the hansom cabs are far worse than scorchers, as they don’t care for the rules of the road or anyone; even the policeman gives them a rest.’

‘They are without doubt the worse phase of road traffic, and the sooner the authorities stop them the better. I myself am constantly through the City and the West End, and am constantly being pushed and crushed out of line by them. I maintain that cyclists are the most correct of any traffic on the roads, and that is why they are not popular with the hansoms.’

A couple of weeks later another letter appeared which responded to the one above, painting a similarly bad picture, but this time of all horse-drawn vehicles who cyclists shared the roads with. The letter’s author explained how,

‘I ride to and from the city every day, through the most crowded parts, and am constantly coming across evidence of the cabby’s selfishness and contempt for cyclists.’

‘I cannot, however, agree with your correspondent when he says that omnibuses and four-wheelers and all other vehicles are law abiding and respectful. There are many cases quite as bad, if not worse than the hansom cab. They go round on the right of trams and other vehicles, taking no notice of cyclists or others who happen to be coming in the opposite direction, on the left of the road. The cyclist must move for the cab, ‘bus, or whatever the law breaking vehicle may happen to be, or else suffer the consequences of a collision, and as the latter is nearly always more or less expensive and painful than getting out of the offending vehicle’s way, the consequence is that cabmen and others know that cyclists will move for them, and they take advantage accordingly.’

There is undoubtedly an air of timelessness in quotes such as the one above. As someone once (sort of) said

‘And so we cycle on, bicycles against the traffic, borne back ceaselessly into the past.’