You might have thought that to embark on a bicycle ride in the 1890s would be, compared to today, are relatively safe undertaking. In a period before cars and dangerous junctions, surely the risks associated with cycling were relatively small?

However, newspapers from the period paint a rather different picture. A regular feature in papers during this period was vivid descriptions of accidents which had occurred on British roads involving cyclists. In 1896 The Yorkshire Herald ran a piece which described how when cycling down a hill in York and faced with an oncoming cab, a young ‘Miss Ada Seale’ ran onto the curb of the pavement and,

‘With the force of the machine striking violently against the curbstone, Miss Seale was thrown violently into Mr Epworth’s shop window, a large pane of heavy glass being smashed. It was seen by the large amount of blood which fell onto the pavement, that the young lady was much cut and injured.’

It is possible to find many similar articles, which would describe in fairly graphic detail accidents which had befallen cyclists, with particular attention given to incidents which involved well-known figures such as M.P.s and reverends (and indeed women). However, it is not just the grisly detail which makes these articles interesting. One particularly noticeably feature about them is that they only really started appearing in newspapers in the early 1890s.

On the face of it this isn’t particularly remarkable (or indeed interesting). However, it is worth remembering that it was in this period that ‘safety’ bicycles began to replace old fashioned ‘ordinaries’ or penny farthings. You would have thought that the accidents which occurred to individuals perched on penny farthings would be much more eventful than those experienced by men and women sat much closer to the ground on ‘safeties’. Why then did newspapers suddenly start taking an interest in cycling accidents when the ‘golden age’ of such events had seemingly just past?

There were certainly many more cyclists in the 1890s than the 1880s. This would have meant there were more cycling accidents, and in particular more which would have involved individuals known to a newspaper’s readership. Moreover, cycling as an activity was much more ‘mainstream’ in this decade than the one preceding it. The increased popularity for cycling would seemingly have created a higher demand for cycling based stories.

However, this doesn’t quite explain why newspapers were so keen to report cycling accidents. Why was it that instead of giving their focus to feel good tales about the benefits of cycling, they were instead focussing on grizzly details of cycling accidents?

It is worth remembering that in the 1890s large numbers of people pedalling ‘safety’ bicycles represented a new social phenomenon. In much the same way that there are occasional panics today about the dangers of social media, or teenagers playing first-person shooting games, the 1890s saw similar concerns and anxieties raised about cycling. Is it safe? What are the risks of getting involved? Does the increasing number of people pedalling these machines represent a danger to society? Reporting on cycling accidents fed into these debates and fears about whether cycling was a suitable activity for people to engage in. 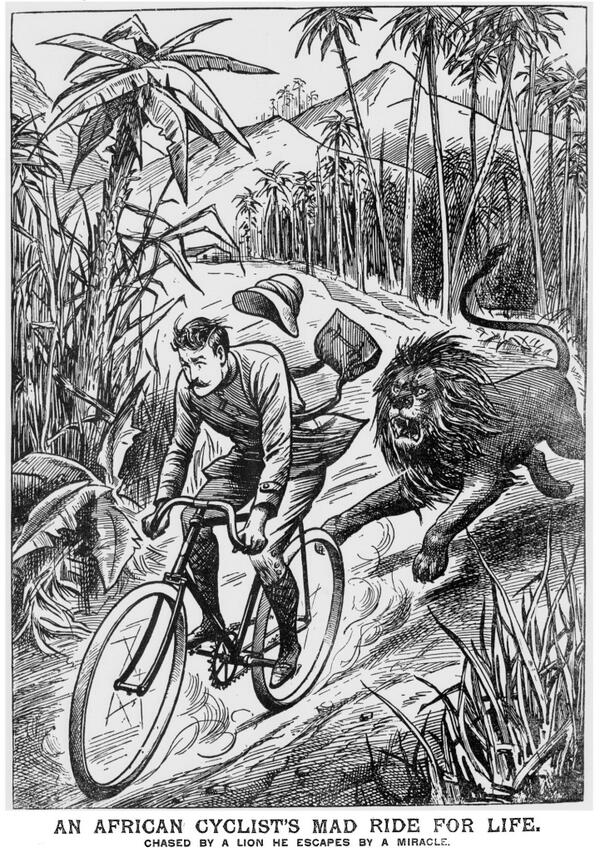 And of course, a number of those who did not cycle resented the fact that there was suddenly a new type of road user who they had to contend with. The Yorkshire Herald began the article quoted above by stating,

‘A rather serious cycling accident, which will perhaps serve as a caution to the many ladies and youths who ride on their bicycles through the busy streets of the city, occurred on Thursday.’ (More on outdated gender norms later.)

Description of a Bicycle Accident in the Brecon and Randor Express, 1891. Source: http://a-day-in-the-life.powys.org.uk/eng/cult/eu_bicy.php

Certainly Cycling saw the willingness of the press to report on cycling accidents as symptomatic of a wider hostility and suspicion shown towards cyclists by large sections of the general public. In 1896 it commented that,

‘Street accidents occur almost daily in every city; but it is only when a cyclist becomes involved that the Press indulges in sub-leaders about them. Unfortunately, Mr T Harrington, M.P., was knocked down by a cyclist in Dublin recently, and injured. The wheelman was a military cyclist, and evidently riding furiously. The papers, of course, took the text as a text, and the burden of the sermon was to characterise wheelmen generally as a reckless lot, riding about the streets with the one object of killing the citizens. It is time this type of journalism disappeared.’

Similarly, in 1898 it bemoaned the fact that,

‘More pedestrians than cyclists are killed in city streets in the course of a year, yet nobody contributes long articles about the ‘terrors of walking’. This eternal prating about the ‘dangers of cycling’ is so very foolish. It makes us quite tired.’ 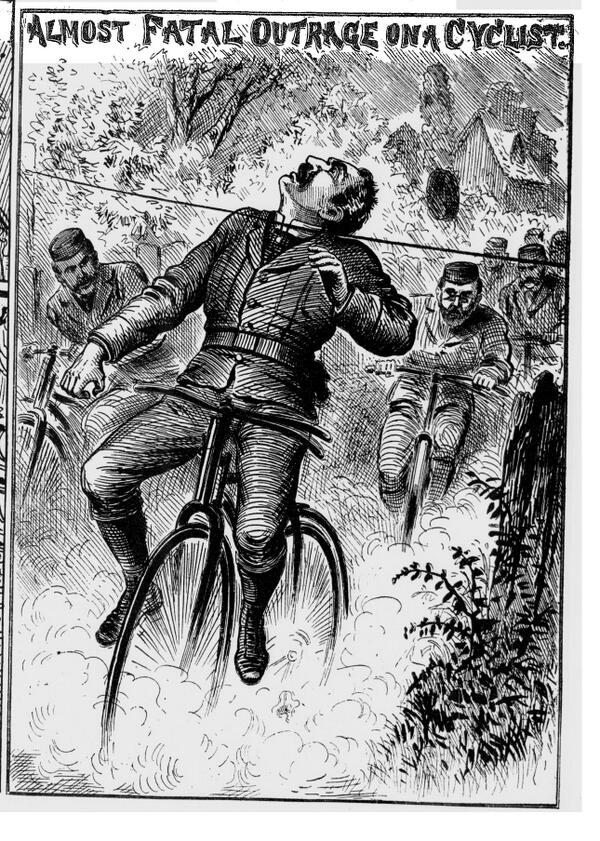 Another one of the ‘dangers of cycling’. Source: https://storify.com/DigiVictorian/tit-bits-from-the-illustrated-police-news

However, Cycling did not just deliver disdainful rejoinders in response to newspaper coverage of cycling accidents. Alongside its criticism of the press was a veiled criticism of the type of cyclist who might be involved in these accidents. The article just quoted did earlier comment that,

‘The majority of traffic accidents happen to lady cyclists, and we must say that, in our opinion, unless a lady possesses extraordinary nerve, and also is a really expert wheelwoman, the streets of London are no place for her to indulge in cycling…After riding by cycle to town each day the writer feels convinced that in many cases the parents are to blame for allowing young girls to ride through the traffic. Probably the bicycle has been purchased for the young lady on her representation to papa that she can ride to business and save the fares. However this may be, many of the young girls we pass on our way to town appear quite unfitted for the task of dodging the traffic, and their parents, if they have respect for life and limb, should insist on their cycles being used in the country lanes for recreation only.’

It is quite something to find a quote that so effortlessly combines outdated gender norms, and an age old response to individuals engaging in new social practices. Unexpected social phenomenon? Young people engaging with it in a manner you deem to be inappropriate? Blame the parents!